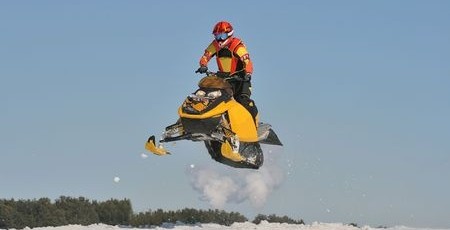 The AMSOIL Championship Snocross (ACS) is made up of eight national races that take place across the U.S., including Minnesota, during the 2015-2016 season. The ACS is sanction by The International Serious of Champions (ISOC) which is based out of Albertville, MN.

Simply put, snocross is extreme snowmobile racing. Snocross continues to grow in popularity and it’s often looked at as the winter version of motocross. Fans flock to venues to watch premier racers compete and take on the snow and ice while tackling challenging tracks, curves and big air-jumps. Events are held at family-friendly venues that can easily host a large amount of spectators such as horse tracks and stadiums. This exciting sports draws fans out into the cold and packs a big punch when it comes to action and fun.

MICI has been a long time sponsor of Judnick Motorsports, a professional snowmobile racing team based in Wisconsin. On January 8th and 9th, Jake Angove of Judnick Motorsports competed at the Pirtek Snocross National that was held at Canterbury Park in Shakopee, MN. He came away with his first ever win in the Pro Lite main event.